Are You Smarter Than a Third Grader? Plurals and Apostrophes

During the course of my weekly Mahjong game with Linda, Suzanne, and Cathy, the conversation shifted to our English language

Linda said, “I hate it when people misuse apostrophes. Don’t they learn about apostrophes in third grade?”

Well, no, in third grade the kids just want to get outside for recess to play ball. You don’t need apostrophes out on the field, just a good pitching or catching arm and fast running. With those three key ingredients, you can be a star.

It’s around third grade that apostrophes start their mischievous and devious lives.

Plurals come easily to young children, that is, until about third grade when they half-learn about apostrophes. Apostrophes look so grown up in writing that children begin to use them everywhere, forgetting what they have learned earlier about plurals. Many children get plurals and apostrophes straightened out after some patient teaching, but alas, many get stuck in third grade using apostrophes on plurals or omitting them on possessive nouns.

When two vowels go walking, the first one does the talking.

Thus in words like speak, teach, coat, and glue you pronounce the sound of the first letter (long vowels say their own name) while the second letter remains silent.

We can make up a similar rhyme to help us remember how to use apostrophes:

When two NOUNs go walking, the first one gets the apostrophe.

The apostrophe answers this question:   Who owns this (book, ball, pen, house, car, whatever)?

Blaze this in Your Memory Banks:

When two NOUNs go walking, the first one gets the apostrophe.

To use the possessive apostrophe correctly, you must have two nouns.

Here’s Abbey’s Alphabet to help you check out this guideline.

Check. Does every example have two nouns? (a person and an object) 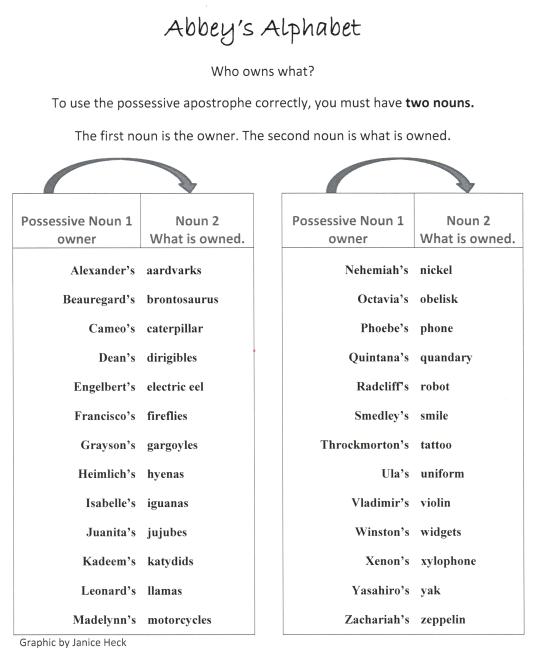 Alas. Of  course, there are more apostrophe rules. We will talk about them in future posts. But for now, just remember that you need a possessive noun and an object noun to use an apostrophe to show possession.

What writing quirks do you find in writing? What’s your pet peeve in writing?

I look forward to reading your comments! Cancel reply